As per IFRS 10 Consolidated Financial Statements, consolidated financial statements are where the company presents all assets, liabilities, equity, revenues, expenses, and cash flows of the parent company and all its subsidiaries as if the group was a single entity.

Consolidation also refers to the process of smaller companies combining into larger ones through mergers and acquisitions (M&A).

Consolidation accounting aims to present the information from the parent company and its subsidiaries as if it originates from a single entity.

There are different local requirements for presenting consolidated financials, but generally, the parent company needs to have control over the subsidiary. Usually, we consider 50% or more ownership to be equal to having control, but in some cases, we might regard holdings of less than 50% as controlling. To illustrate such a case, consider a small company that produces a specific part that is exclusively sold to our entity. Even though our business has no shareholding in the smaller company, we may have to consider consolidating it. Being the sole customer, we can dictate terms, and this means we effectively have control.

Let us take a look at the fundamental principles that underline the consolidation process.

Elimination of Intercompany Balances and Transactions

It is common for entities within the same group to do business with each other. Therefore we have two types of eliminations. We cancel out balances between related parties in the Balance Sheet as a receivable for Company A will be payable for Company B. The same happens to revenues and expenses in the period –we eliminated the amounts so that we do not inflate the Income Statement.

In reality, the acquired subsidiary may have accumulated profit or loss at the acquisition date, and the holding company usually acquires the shares either at a premium or at a discount. Whenever the purchase cost of an investment exceeds its par value, we recognize an intangible asset called Goodwill. On the other side, if we acquire the shares at a discount, we realize a Capital Reserve.

We can calculate Goodwill (or the Capital Reserve) with the following formula: 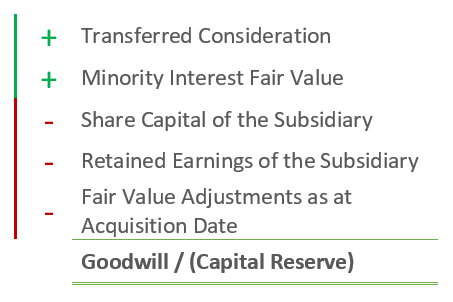 If we partly own a subsidiary, the rest of the shares that are held by other parties forms the Non-Controlling Interest. Also known as Minority Interest, it represents the proportion of net assets of the subsidiary that relates to outside investors. In the Consolidated Balance Sheet statement, we present the NCI as a separate line item within Equity.

We calculate the Non-Controlling Interest with the following formula:

We will take a look at a simplified consolidation of the Income Statement and Balance Sheet of a company with three subsidiaries. Two of them are 100% owned by the parent company, and minority interest holds 20% of the third entity.

Keep in mind that this is an over-simplified example to illustrate the fundamental principles of financial statement consolidation.

First, let’s look at the Income Statements of the four companies. We ensure that these are presented following the same financial reporting framework and place them side by side. 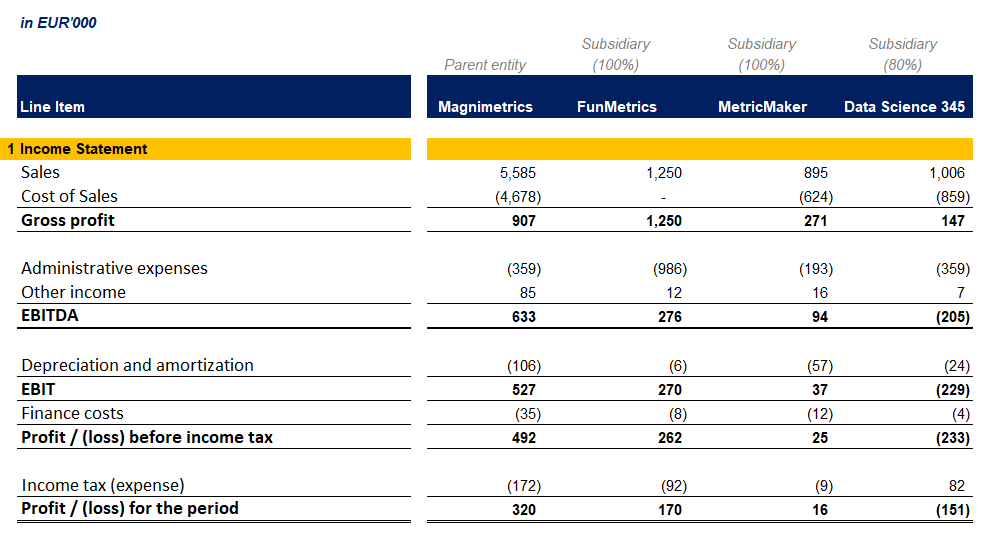 The next step is to eliminate intercompany transactions, as discussed above. We know that our other subsidiary (MetricMaker) provides assembly services to Magnimetrics, the parent entity, which is the sole client of the subsidiary. Therefore the revenue recognized by the subsidiary is also booked as Cost of Sales in the parent company. We know we have to eliminate those, so the Income Statement is not inflated. In doing so, we remain with the Cost of Sales of MetricMaker, the subsidiary, and the Sales Revenue of Magnimetrics, the parent company. And this is how the whole transaction would look like if both companies were a single entity.

Next, let’s take a look at the Balance Sheet statements of the four companies. 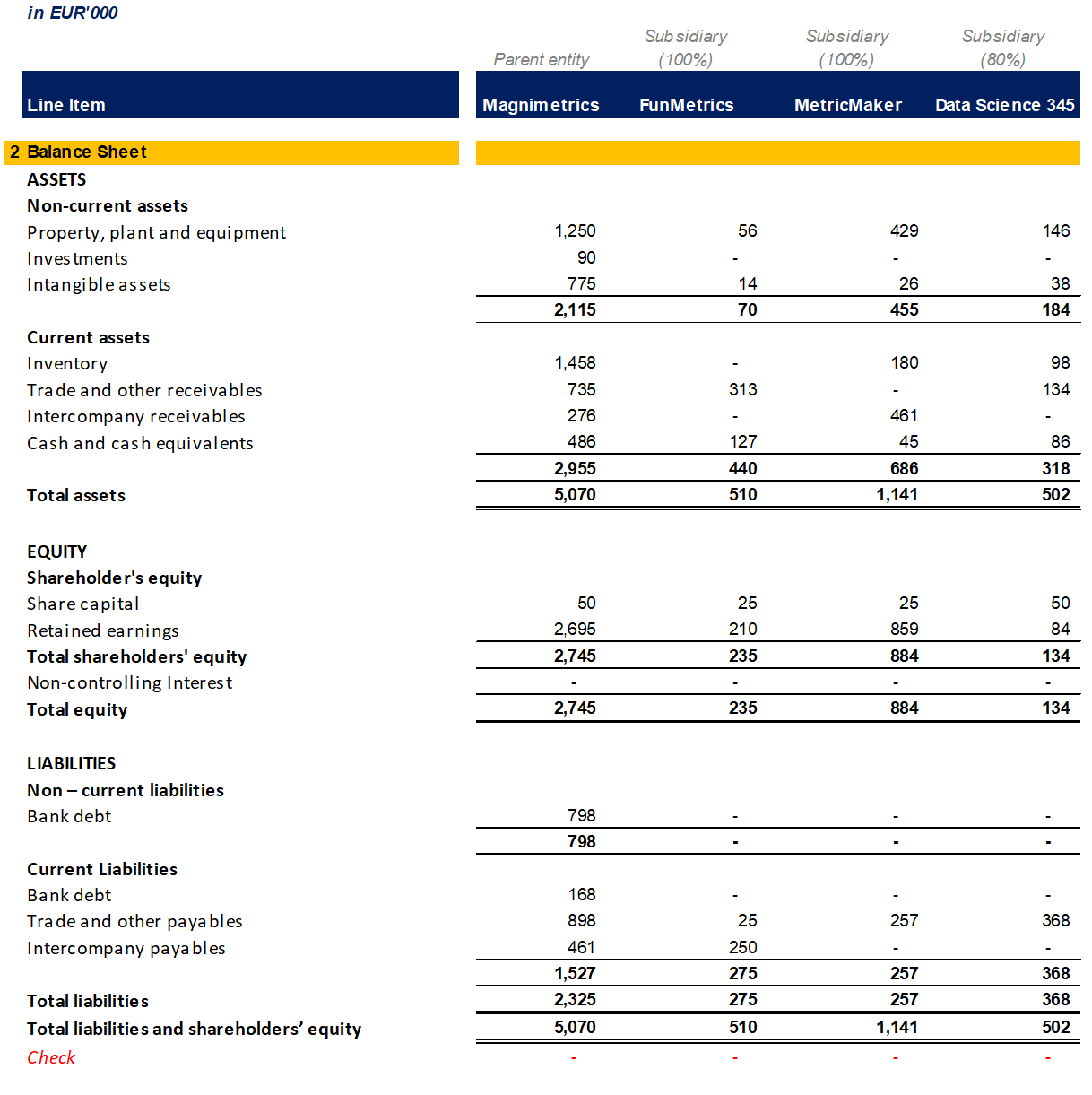 We notice that the same subsidiary, MetricMaker, has € 461 thousand receivables from related parties. On the opposite side, the parent entity, Magnimetrics, has Intercompany payables at the amount of € 461 thousand. Following the same principle, we cancel these out.

Similarly, FunMetrics, our first subsidiary, has an outstanding balance of € 250 thousand owed to related parties. The parent company is the only one with remaining Intercompany receivables, and we can conclude that FunMetrics owes the amount to the holding company. The balance is probably outstanding from prior periods, as we had no transactions between the two entities in the year. Otherwise, we would have eliminated them in the Income Statement.

Canceling these € 250 thousand out, we have an Intercompany receivables balance of € 26 thousand, probably related to another associated party, which is not part of the consolidation.

The other € 10 thousand of the share capital are part of our Non-Controlling Interest adjustment. 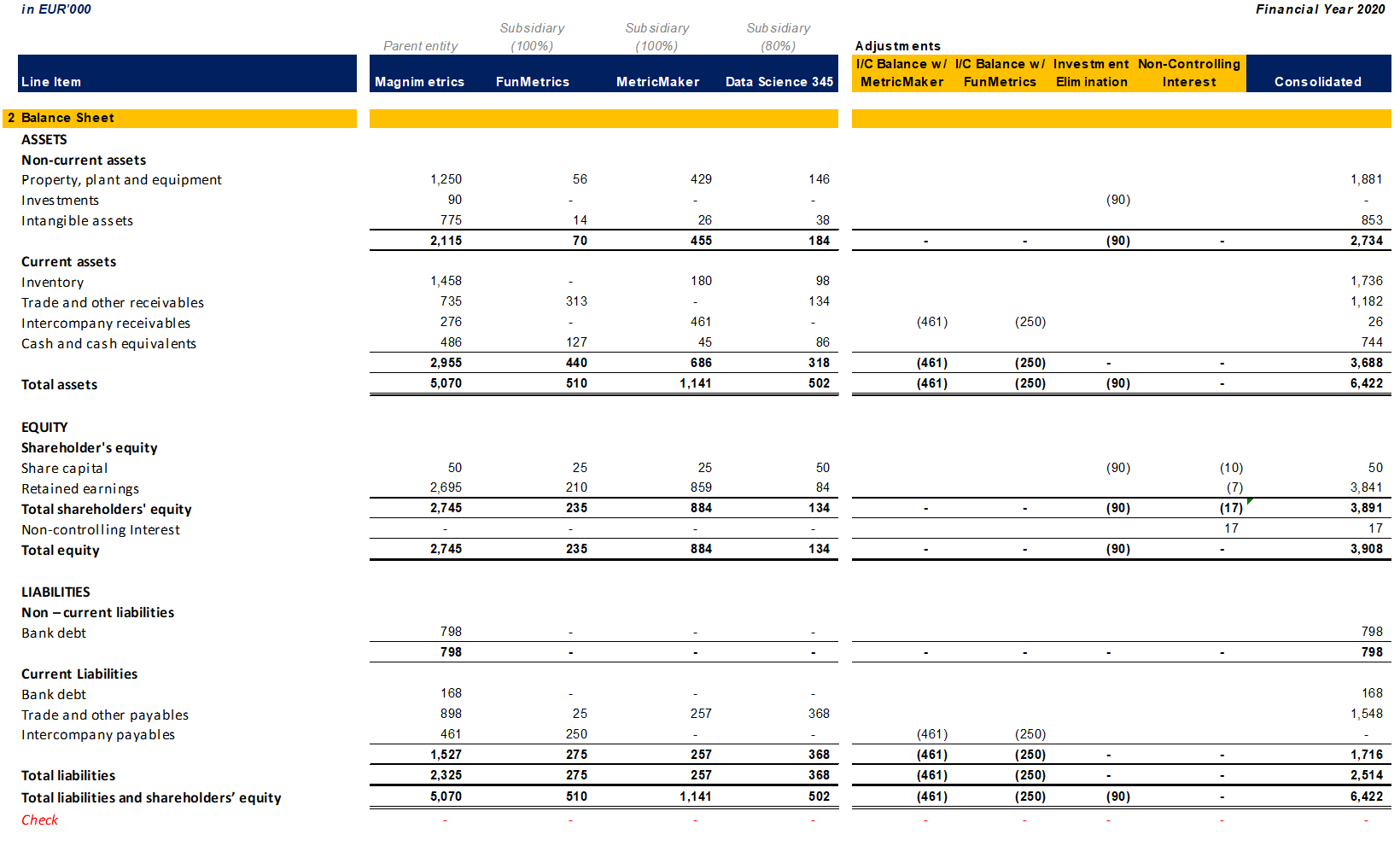 And here’s the working for our NCI, following the formula we discussed above in the prior year, and then adding the 20% attributable share from the result for the current year. 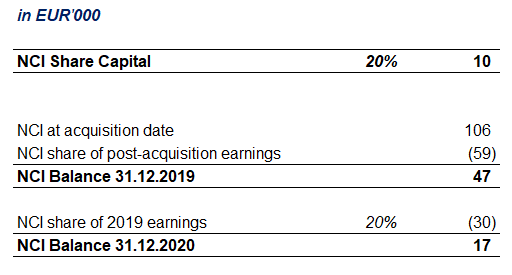 A parent company and its subsidiaries form one economic entity. Therefore investors, regulators, customers, vendors, and other stakeholders often prefer to look at consolidated financial statements when they evaluate the overall performance and position of the parent entity and its subsidiaries.

Please, show your support by sharing the article with colleagues and friends. Also, don’t forget to download the Excel file with the example model below. 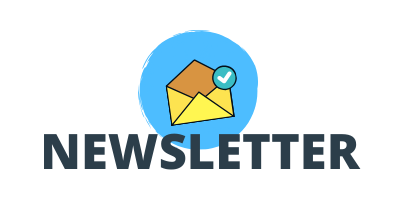 The information and views set out in this publication are those of the author(s) and do not necessarily reflect the official opinion of Magnimetrics. Neither Magnimetrics nor any person acting on their behalf may be held responsible for the use which may be made of the information contained herein. The information in this article is for educational purposes only and should not be treated as professional advice. Magnimetrics accepts no responsibility for any damages or losses sustained in the result of using the information presented in the publication. 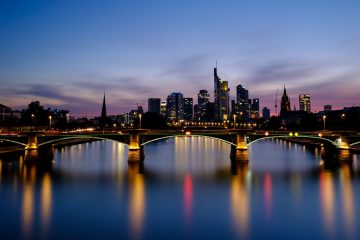 Understand the Market Value of Equity

The Market Value of Equity of the company, also known as Market Capitalization, is the total monetary value of the firm’s equity. We calculate it as the current stock price multiplied by the number of Read more… 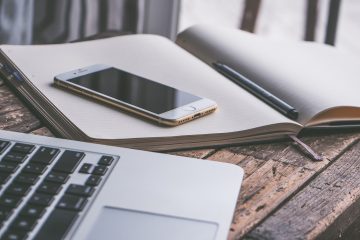 Perform a One-Way Analysis of Variance (ANOVA) in Excel

The Analysis of Variance (ANOVA) has many varieties, but in essence, it has the purpose of evaluating whether factors are associated with any outcome values. And factors are categorical variables we use to group the Read more… 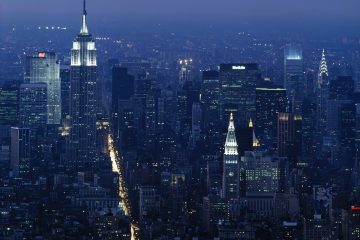 Seasonality and Trend Forecast with Regression in Excel

In our last article, we discussed Seasonality in Financial Modeling and Analysis. We went over an example Excel model of calculating a forecast with seasonality indexes. Today we will use regression analysis in Excel to Read more…